Tuesday at The Table 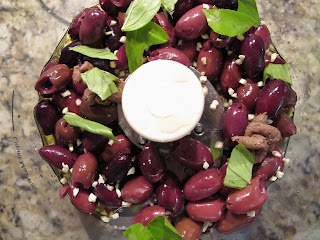 I was a little bit stumped when Debbie over at A Quilter's Table announced that August's theme would be the Herbal Table - I mean I'm much more of a "dessert" or "pasta" table kind of girl ;-) But then it occurred to me that might be a great opportunity to actually use some of the herbs that have been growing like crazy in our little herb patch. Even though the green thumb that runs so strong in our family apparently skipped me, it landed with full force on my daughter who loves to dig in the dirt and water things. She's also obsessed with compost - at not quit three. Nutty, right? But anyway, we started a little herb garden in the courtyard and it has taken off. Plus I accidentally propagated (thanks for the new word Mom!) a couple new basil plants quite by accident by leaving the cuttings in a cup of water in the counter. So we have a LOT of fresh basil to use. So I decided to make Alton Brown's Tapenade recipe and try to re-create some veggie sandwiches I swear I saw in Martha Stewart's Everyday Food. 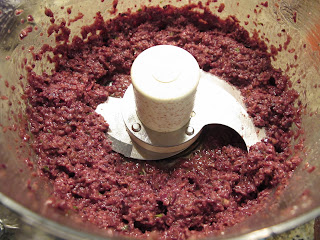 The slight changes I made were: I used a 12oz jar of kalamata olives from Trader Joe's, rinsed along with 2 tsp. of anchovy paste, 1 tsp. freeze dried minced garlic (I love this stuff, never goes bad, saw close as you can get to fresh) and I didn't have any capers so I added a Tbsp. of balsamic vinegar instead. Plus all the other ingredients the recipe called for and a minute or two in the food processor to make a paste (spread?). 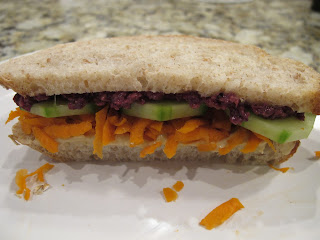 Then the yummy sandwich! Whole grain bread (also from Trader Joe's), a layer of hummus, grated carrots, thin sliced cucumbers and then the tapenade. I'm am SO not a veggie person and this was absolutely delicious!  You could always add a little goat cheese too and my husband thought it was easier to eat open-faced. The fresh basil added a lovely fragrance to the tapenade and I'm sure we'll be putting this into the regular rotation.