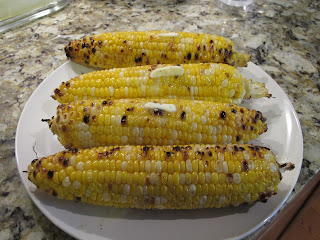 Hey folks! Remember me? Last week was a whirlwind of out-of-town company (yay!) and yard work (UGH) all while the Daddy around here was gone for a couple of weeks on a business trip. Can you say BUSY? So to make up for missing last Tuesday I have no one, not two but THREE yummy summer recipes to share!

The first is this one, grilled corn. We did this for the first time last summer, fell in love with it and made it countless times since. It's so ridiculously EASY. Husk your corn and soak the ears in a bowl of cold water for about 20 minutes. We usually break them in half to make them easier to soak/grill/share - but of course this time we left them long. Works the same either way. So then you rub them with olive oil and grill them over medium heat, turning a couple of times, for about 20 minutes. Then slather with butter, salt and pepper. Or cheese ;-) Seriously, that's all there is to it and it's the yummiest corn I've ever had. 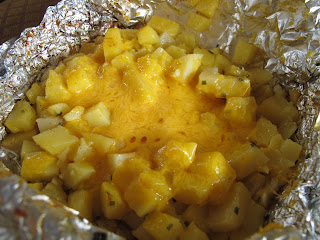 Next up is this bundle of cheesy goodness, courtesy of my other BFF, Pinterest. ;-) You can find the Three Cheese Potatoes recipe right here. You basically peel and cube the potatoes, toss them in oil and/or butter and some seasonings and bake in a foil packet on the grill. Then when the potatoes are cooked you throw some cheese on top. Potatoes? Good. Cheese? Good. Not heating the oven up in June? Great! These were my favorite part of this meal and I will absolutely be making them again. Soon. 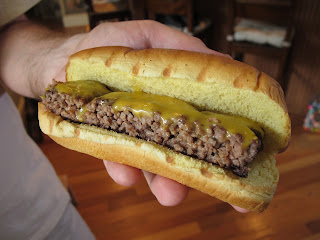 Finally we have my husband's pride and joy - the burger day. It's a hamburger shaped like a hot dog. He was working in San Francisco at that little golf tournament they just had out there and these were a specialty that the club served. He was smitten. He was determined to re-create them at home and so he did. He basically used one pound of ground round (80/20) and pressed it between two cookie sheets to get it to be one thin rectangle that he cooked on the griddle (NOT on the grill). Flipping it was a trick! He sprinkled both sides with salt and pepper and that was it for the seasoning. When it was pretty well done he added some American cheese on top and then sliced to fit the buns. Gotta say they were pretty delicious - nice crust from the griddle and the fun form factor made them a hit. We had a friend who was nice enough to share this article on hamburger dogs and these pictures show the burgers cooked individually. So in the spirit of research we'll probably try them that way next time. Either way, tasty. Who knew that the burger dog was such a thing?! Not me but I'm happy to share so now you can be in the know as well :-) Hope you're getting some yummy summer meals shared around your table as well.

Thanks again to Debbie at A Quilter's Table for hosting Tuesday at the Summer Table series!
Posted by Darcy at 9:13 PM