Tuesday at the (Summer) Table :: Desserts 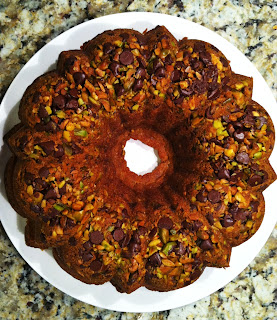 Wait, how can it be the last Tuesday in June? Didn't we just start June? I mean really. There has been a lot more baking than sewing going on around here lately, maybe because we've had some occasions to celebrate. Maybe because I've been on single parenting patrol while Daddy is out of town working and I love my kid but I am wiped out by the end of every jam-packed day. So my machine and I are looking wistfully at each other, hoping to have a playdate of our own soon. SOON. In the meantime I will entertain you with photos of yummy food! 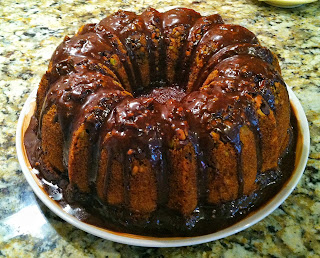 This beauty is (was) a chocolate pistachio cake with a shiny chocolate glaze made for a friend's belated birthday. We had been comparing notes about all the yummy pistachio things that had been going around on Pinterest so I figured this might work. It was so pretty and I could have eaten the entire pan of that glaze with a spoon. And I just might one of these nights...I bet it would make fantastic sauce over ice cream too. Hmmm. I may have just finalized our dinner plans ;-)

The cake and glaze are both from the Cake Mix Doctor cookbook, which I love and use all the time. I was just going to share the cupcake recipe below but I feel like now that I've teased you with the glaze I should at least tell you what's in it (in case it shows up on your dinner table tonight too).

Melt the butter in a saucepan over low heat, add the cocoa powder and cream and stir until the mixture thickens (about 2 minutes - do not boil). Take off the heat and add the vanilla and powdered sugar, stirring until smooth. Spoon over cooled cake or directly into your mouth. 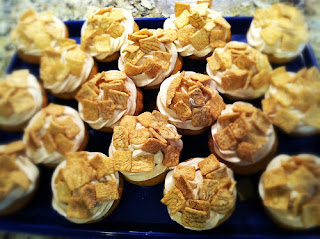 Then my BABY, baby brother turned 37. THIRTY SEVEN! I have no idea how that is possible. And it made ME feel old (which I am not but it was momentarily shocking). So my brother isn't really a fan of sweets (crazy right?) but he loves these cupcakes. As in guards the leftovers with a snarl type love, which absolutely cracks me up. Cinnamon Toast Cupcakes with Cinnamon Cream Cheese Frosting and some Cinnamon Toast Crunch cereal on top for, you know, crunch. I've never met anyone who didn't love these. It's best to frost them close to when you're planning on eating them because the cereal draws moisture really quickly. Not usually a problem around these parts but thought I'd let you know. 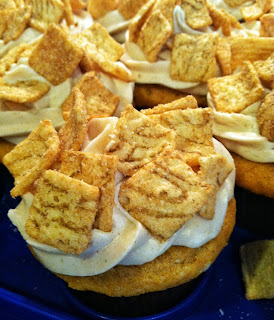 Cinnamon Toast Cupcakes (from Cupcakes from the Cake Mix Doctor)

1 pkg plain yellow cake mix 18.25oz (and double check because in a super sneaky move that is making me NUTS, most cake mixes are now a lot less. Same box size, 3 oz less product. SO super annoying. I would gladly pay more to not have all my cake mix recipes ruined. Ok, rant over)

Preheat the oven to 350 and line 24 cupcake pans with paper liners (ok, really this recipe always makes about 30 cupcakes for me but the recipe says 24. You might get more). Mix all the ingredients in a large bowl on slow speed of mixer for about 30 seconds. Turn mixer off and scrape down bowl. Mix an additional two minute until mixture is thick and creamy. Spoon (or scoop) about 1/3 C batter into each cup, filling it about three quarts full. bake 18 - 22 minutes, until lightly golden brown and the spring back when you touch them. Let cool in pan 5 minutes and then completely on racks before frosting.

Blend butter and cream cheese until combined, then add powdered sugar one cup at a time and cinnamon. Mix on medium until fluffy. (you can add more powdered sugar to thicken or a splash of milk to thin, if needed). Frost cupcakes, then sprinkle with Cinnamon Toast Crunch cereal - you may need to press cereal to get it to stay on. Eat and enjoy!

Thanks again to Debbie over at a Quilter's Table for dreaming up and hosting Tuesday at the (Summer) Table - it's been yummy!