SO lets catch up.

So, what a month. I am SO ready for March to move on along and April to get here. Come on April! I feel like I've completely fallen off the blogging wagon, forgive me, I'm hoping to be back here now. Because I miss you guys and I like being here! But you know how, when you're feeling stretched to your absolute limit, something has to give? Well blogging was it this month. But I'm back on the horse! Yay! So lets get started catching up. We started the month with my husband's birthday, then the passing of my great aunt in NY, not expected so even though she was almost 82 we were surprised and saddened. Then there was the Jerry Springer-esque family drama surrounding the funeral, will and estate. I'll spare you the gory detail but it was (and is) atrocious. I guess I'm a bit naive and constantly surprised by how awful people can act. *sigh* Then my in-laws came for the weekend and we celebrated another family birthday a bit south of Atlanta. There was the first baby shower for my sister-in-law then next weekend and of course I'm always happy to bake. For anything. Anytime. Oh and then yeah, happy to eat too ;-) 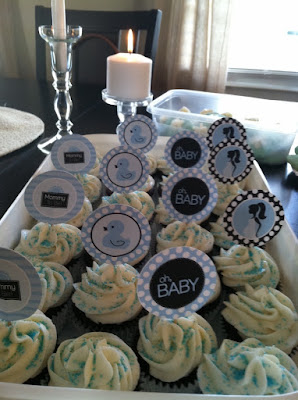 I made chocolate sour cream cupcakes with home made vanilla butter cream (I think I've shared both these recipes here before). Then I bought these cute cupcake toppers on etsy from Kelly Medina Studios as a pdf, printed them out and used a glue stick to sandwich a toothpick between the front and back. Tasty. 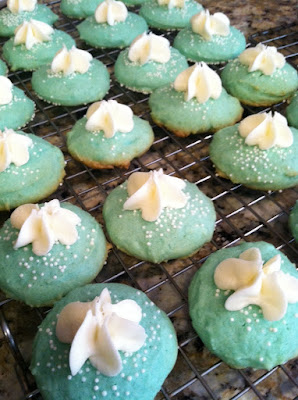 Then I made Gwen's Jello Cookies - I was intrigued when I saw the recipe on her blog - how would they taste? Weird? Uh, weird like this: "hmmm, this is a blue cookie. Weird. munch, munch, munch. I need another one to really understand this flavor. Ok, just one more." And you pretty much get the idea. I used blue jello - it had some catchy name that I can't remember but it was a berry flavor and they were good. Like I'm making strawberry next and then probably lime. I added a dash of frosting because I had some leftover from doing the cupcakes. I liked it with but they were just as good without. Plus, who else brought blue cookies for the shower? NO ONE! Teehee! Recipe here! 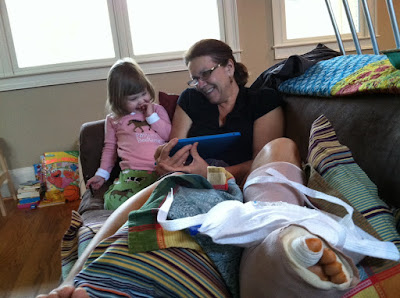 So then my mom (my poor mom) had surgery on her foot last Wednesday - a bunion-ectomy - and it's been a whirlwind of hospital, pharmacy, DR's office, pharmacy again, etc. Thankfully we live close enough and have a big enough house that she could come stay with us. Even though it was a much needed procedure (re-doing the first one she had done in 1989) it has not been fun. Seeing someone you love in pain completely sucks. I also have a new appreciation for being able to pick something up and carry it with me as I walk around the house (something I do millions of times each day). Crutches pretty much take that ability away completely. I've also realized that I probably do NOT have the coordination to manage crutches at all anyway. Luckily we have built in entertainment around here in the form a toddler willing to sing, dance and demand stories read to her at any (every) given moment. Great distraction to say the least and my dear daughter was literally thrilled to have a captive Nana. My mom went home yesterday and H cried when she realized that Nana wasn't moving in for good. Aaaww.

So later this week I'll have a recap of our Crafty Meet-up and the project I took. Also assuming my sewing mojo shows back up I might even get a mini quilt done soon, to celebrate the arrival of APRIL! Sweet! Oh and Debbie tagged me this week with some fun questions that I'll finally be getting around to answering :-)
Posted by Darcy at 3:35 PM