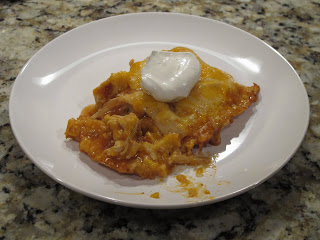 I've been pinning and actually cooking a lot of new recipes from Pintrest lately, so I thought I'd start keeping track of some of them here. The "tasty" part comes from what my 2 year old has been saying and generally cracking me up with lately - as in "tasty pancake mom". Too funny!

This recipe came from originally came from Cooking Light via My Recipe (you know how these things go) but I of course made the full fat version :-) I also used mild enchilada sauce and left out the chili's because I was trying to get said 2 year to eat it. No luck on that front but her dad and I thought it was tasty!

Combine all ingredients and bake in a greased 9x13 pan for 20 - 25 minutes (until golden brown) at 400 degrees. Remove from oven and top with:

I mixed the enchilada sauce and chicken and then topped with the cheese. Bake an additional 15 minutes (until cheese is melted). Let stand 5 - 10 minutes and serve with sour cream on top.

I'm wondering about adding some black beans next time, either with chicken or in cornbread but it was great (and easy) just like this. You could spice it up by adding some cayenne to the cornbread and/or spicy enchilada sauce. Oh and I used Ina's Roast Chicken recipe and had the shredded chicken in the freezer which made it even easier.
Posted by Darcy at 5:11 PM