We take a break from our regularly scheduled crafting... 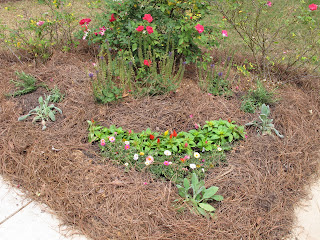 To bring you new flowers for the front corner bed. The pansies were more than done and I was feeling sad watching the hostas we'd planted there march toward their slow, seemingly inevitable death-by-sunburn so I decided it was time for some new faces out there. Hopefully some faces that will thrive in the absolutely ALL DAY full sun that corner gets. I did not get the green thumb in my family and I'm okay with that - the watering, weeding, pruning - UGH. Don't get me wrong, I love how a nicely landscaped yard or garden or park looks, I just can't ever seem to make it happen for myself. So this is a bit of a departure for me and I hope it works out. I just went with "full sun" on the labels, hoping for the best. As for those poor sad hostas? They got a new, shadier home. 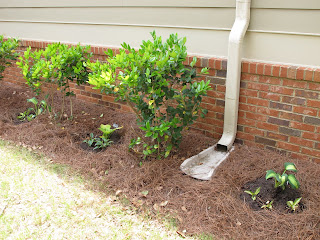 In our courtyard. The doodlebug "helped" me dig the holes and plant and especially water everything. And then water everything some more ;-) I trimmed the bushes which seemed way overgrown and I'm hoping my little green friends like this spot a bit better. I did put one hole in a spot on the other side of the house that gets more sun than I realized as I'm looking at it today and may have to be moved again. But I am tired so that move might happen next week. After our company is gone. Oh yeah, company for the long weekend, and so much still on my to-do list it isn't even funny. But isn't that always how it is when company's coming? You suddenly see all the things that aren't that bad as awful and urgently needing to be fixed/changed/cleaned and end up with new flower beds all around. 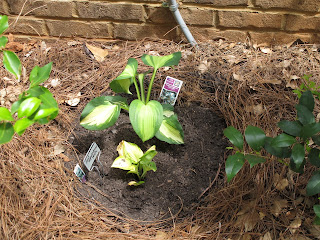 Too sunny? I think a few 90 degree days will let me know sooner rather than later.

6/1/11 - Moved those poor plants again yesterday. It's supposed to be in the mid to UPPER 90's all week and those poor babies were still getting too much sun. Hopefully their new shady spot will be their home for longer than a week :-)
Posted by Darcy at 12:32 PM