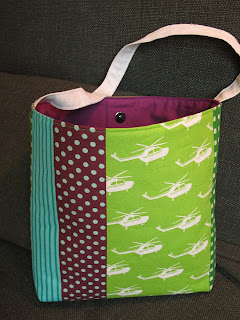 This time I used the Echino airplane print I got at Whipstitch, Kona Berry for the lining and the same Waterford linen as the first bag for the handle. I thought about using the Echino print for the handle but it just seemed like too much if you know what I mean and the linen matches the airplane color perfectly. I used fusible fleece again for the support element, fused to the outer fabric. I know some people shudder at the thought but I just really like the structure it gives and it doesn't bother me at all to fuse it right on to the Echino, especially when it turns out so dang great! 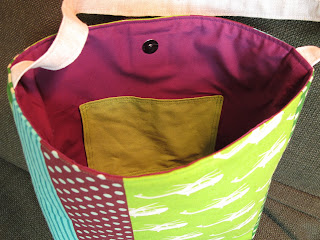 This time I really kept track and it took me an hour and a half to whip this up! Granted I've made several now so the pattern steps are pretty familiar to me but you gotta love something that turns so cute in such a little bit of time!

I decided that I like making the pocket with a contrasting fabric so I went with the grass green that matched the airplane background - the colors here aren't the best but it really pops and I love how it came together. I was going to use that green for the whole lining originally but it was too matchy-matchy withe the outer fabric and it looked way better with the contrast of the red-violet fabric against that yellow-green outside. 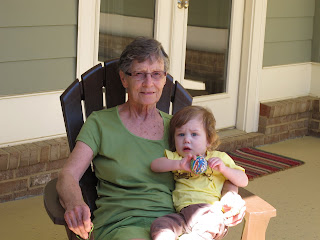 On an-un-craft-related note Great Gram went home today and someone is very sad that her playmate disappeared. Thankfully their mutual admiration society will be meeting again in one short month for our favorite cousin's college graduation (I'll save "How can my baby cousin be graduating from college" for it's own separate post). Here's to grandmothers - they pretty much rock around here and we feel so lucky to have them! xoxo
Posted by Darcy at 8:48 PM